Capt. Tony DiGiulian's tips for catching wahoo in South Florida around the full moons in July and August.

Wahoo can be caught year-round in South Florida, but the best time of the year to catch them is around the full moons in July and August.

With a full moon on Sunday, offshore anglers should target the speedy, tasty gamefish now through most of next week.

“We’ve caught them on the day of the full moon, but if I had to choose, I’d probably fish Friday, Saturday and Monday through Thursday,” Capt. Tony DiGiulian said.

Live bait such as goggle-eyes will catch wahoo, but among the best baits this time of year are small bonitos and skipjack tunas.

It’s not unusual for anglers to be fighting those species when they feel a thump — and then reel in the head of the fish. 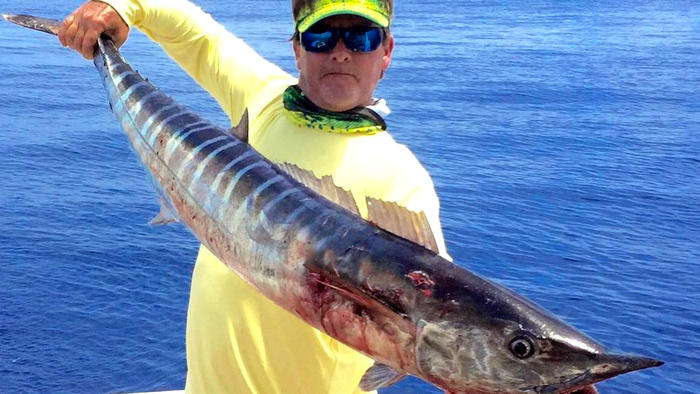 Capt. Tony DiGiulian with a wahoo, which bite best in South Florida around the full moons in July and August. DiGiulian catches the fish on live baits as well as bonito strips and ballyhoos trolled behind a Mylar Witch on a planer. -Original Credit: (Zac Yarbrough)

“We’ve all reeled them in cut in half,” said Tom Greene, who added that anything from a 1- or 2-pound bonito to a 15-pounder can be used for bait. “Think of any one you reeled in cut in half, that’s how big a bait you can use.”

The owner of Custom Rod and Reel in Lighthouse Point, Greene said to look for small bonitos flipping on the surface and troll a quill rig below the surface to catch a few.

He rigs the bait by running a wax loop behind its nose and securing it to a J-hook, which can be as large as an 11-0 for a big bonito. A second hook attached by a piece of wire to the front hook is lightly hooked in the skin of the bait near its tail. A 4- to 6-foot wire leader tied to a 10- to 15-foot 60- to 100-pound monofilament leader completes the rig.

Greene said the long leader provides better control of a wahoo when it’s at the boat and added that the boat should be moving forward as you gaff the fish to prevent the wahoo from going under the boat.

DiGiulian, who likes to slow-troll live baits on downriggers, noted that wahoo slice their prey in half, then spin around to eat both pieces, so anglers need to pay attention.

“If you get a wahoo bite and it’s a short bite, if you free-spool the bait back immediately, that wahoo will come back and eat it,” said DiGiulian, of Fort Lauderdale, who fishes tournaments on Wish List, runs private boats and organizes the IGFA School of Sportfishing seminars at the Fort Lauderdale and Palm Beach boat shows. 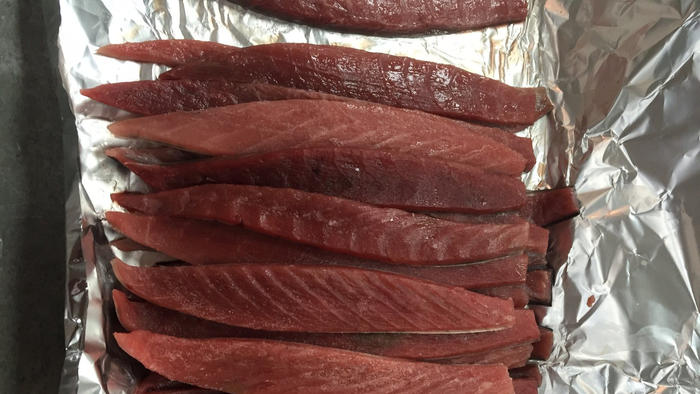 DiGiulian also trolls double-hooked bonito strips and ballyhoo for wahoo. He rigs the baits behind a Mylar Witch made by Capt. Stan Reuwer that is available at local tackle stores.

“The more waggling of the bait that you can get, the better off you’re going to be. We break the backbones of the ballyhoos so they’re more flexible and pliable and we use big strips,” DiGiulian said.

“Probably the most popular way to fish them is trolling with a planer. The thing we’ve been using the most lately is the removable planer rig from Custom Rod and Reel.”

As he explained, being able to remove the planer from the 100-foot-long shock cord attached to the bait allows the line to be reeled in instead of pulled in by hand.

DiGiulian said the boat trolls in a zig-zag pattern from 130 to 300 feet. Fishing around schools of small bonitos or blackfin tunas and where flying fish are being chased can produce wahoo, which DiGiulian said often “hunt and eat in big packs.”

“When trolling, when you catch a wahoo, you want to make sure you go over the same spot many times.”

Given the hot weather, early morning and late afternoon are the most comfortable times to fish. Ideally, DiGiulian said the start of an outgoing or incoming tide is best.

He also pays attention to the position of the moon. Good times are when the moon is directly overhead and just above the horizon, whether it’s rising or falling.

The daily bag limit for wahoo is two per person and there is no size limit, but one big fish will feed a lot of people. And you don’t even have to cook it.

“Wahoo raw is hard to beat,” DiGiulian said. “My favorite way is to sear it on the outside and slice it thin so it’s raw in the middle.” 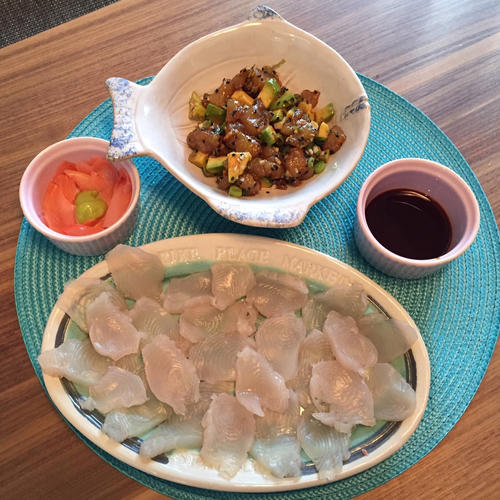 Wahoo bite best in South Florida around the full moons in July and August. Capt. Tony DiGiulian likes to make wahoo sashimi or sear the fish and slice it thinly so it is raw in the middle. - Original Credit: Courtesy - Original Source:

🍀 Countdown to the SHAMROCK SHOOTOUT 🍀